WELCOME TO JODIE COMER FAN your online resource for everything Jodie Comer. Jodie is best known for roles in her hit TV Show "Killing Eve", Doctor Foster, and Thirteen. We aim to bring you all the latest news and images relating to Jodie's acting career and strive to remain 100% gossip-and-paparazzi-free. Please take a look around and be sure to visit again to stay up-to-date on the latest news, photos and more on Jodie.
Latest Projects
Jodie Comer Fan on Twitter! @jodiecomerorg

Comer takes her first leading lady role in a major Hollywood production with this summer’sÂ Free Guy. And it’s just the start.

WithÂ Killing EveÂ drawing to a closeÂ next year,Â Jodie Comer, who made a name for herself on the BBC drama, now embarks on a new era as the star of her first Hollywood movie – even though, technically, she already made her mainstream film debut.

Star Wars: The Rise of SkywalkerÂ directorÂ J.J. AbramsÂ had seen Comer’s work as chic, sharp-tongued assassin Villanelle and had to have her for a small but splashy role in his 2019 film, that of the mysterious mother of rising Jedi Rey (Daisy Ridley).

“It was spectacular,” Comer says of the part over the phone. “But I had to keep that a secret for a long, long, long time.”

The 28-year-old Liverpool-born actress admits she hadn’t seen any of theÂ Star WarsÂ films but felt the weight of being involved, even in a small capacity. “That’s a beast of its own,” she remarks. The appearance required just a day’s worth of work as she filmed flashback sequences of Rey’s mother and father, the latter a strand-cast clone of Darth Sidious (Ian McDiarmid), losing their lives to protect their daughter from her galaxy-conquering grandfather. Comer calls it “the most peculiar, incredible experience.”

“Hearing the detail that goes into the makeup and the costumes, it was so eye-opening,” she elaborates. “Speaking about green screen and visual effects, when I gotÂ Star Wars, I was like, ‘They’ll probably be a lot that I don’t see.’ But these kind of figures, their mouths move and they were remote-controlled and there was so much there that you didn’t have to imagine.”

Call it a solid introduction for Comer, who would soon face what she considers a more intimidating experience as the leading lady oppositeÂ Ryan ReynoldsÂ inÂ Free Guy, another big-budget studio feature.

Despite what one might think, nobody in the industry knew of Comer when she first started making the rounds in Hollywood to convince studio executives she should be booked and busy.Â Killing Eve‘s first season was on the air at the time, but the show hadn’t yet amassed such a following as it has today. In between takes onÂ Free Guy‘s Boston set in June 2019, when the production took over cross streets near the Waterfront, filmmakerÂ Shawn LevyÂ admits he hadn’t seen any of the show before casting Comer to play two roles in his film: Milly, a video game developer, and Molotovgirl, Milly’s gunslinging avatar inside the popular gameÂ Free City, in which Reynolds’ plays Guy, a background character who becomes aware of his virtual existence.

The day after Comer wrapped onÂ Killing EveÂ season 2 before Christmas 2018, she flew to New York for a chemistry read with Reynolds. The flight from the U.K. proved to be “a long way to think about all the ways in which I could possibly f— up this meeting,” Comer recalls. But the audition felt like a relaxed workshop with Levy and her soon-to-be costar working through scenes. She flew back home the next day, and a few weeks later brought the news she had landed her first leading role in a big-budget Hollywood movie.

“Casting is always tricky,” Levy remembers of the audition process. “We had the luxury of lots of people putting their hand up that are impossibly talented, not the least of which being Jodie Comer, who just anchors this movie in a way that I think is going to really blow people away. She’s so fantastic.”

“I just remember so vividly how terrified I was when I started the job [compared] to how I felt when I finished,” Comer says. “I’d never done a film of this size with the caliber of people. I felt like a very small part of something very big, and I always had this insecurity of having come from television. I think I created this idea that film is a completely different beast when actually you walk up to set every day and you prepare in the same way.”

Free Guy, also featuringÂ Stranger Things‘Â Joe KeeryÂ andÂ Jojo Rabbit‘sÂ Taika Waititi, introduced her to a lot of firsts. Though she had come equipped with that experience onÂ Star Wars, the movie was the first time she acted heavily opposite green screen. (“I feel like I rely so much on what other actors are giving me that when you are now put in a green box and told to imagine something flying towards you, that’s a totally different skill.”) It was the most physically demanding role she’s had so far, even factoring inÂ Killing Eve. (“A lot of people thinkÂ Killing EveÂ is very physical, but it really isn’t all that much.”) In one sequence, Comer and Reynolds simulate jumping through a window on a motorcycle as she fires at enemies. 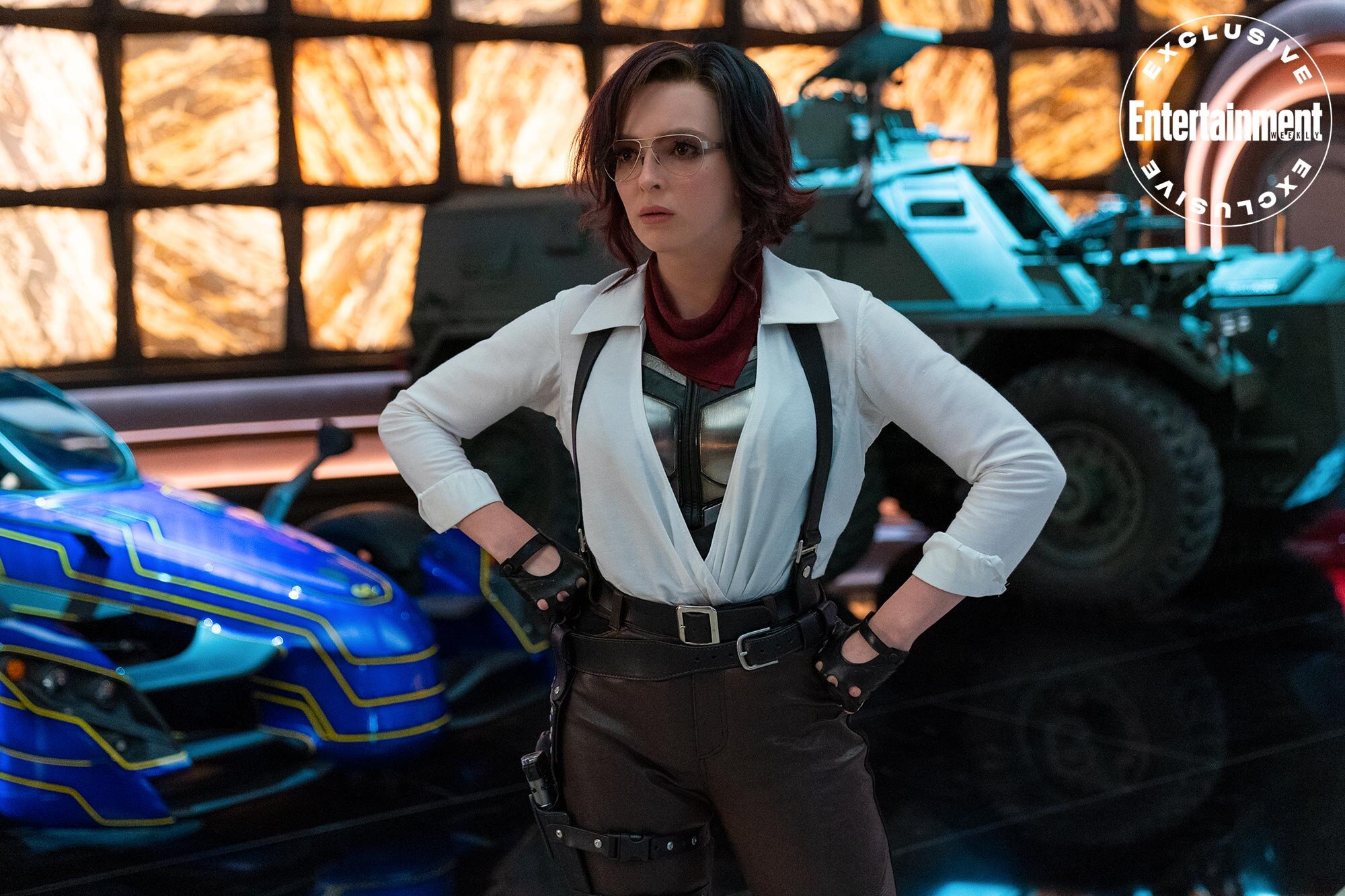 The film was also the first time Comer got deep into playing video games. Levy compares the virtual world ofÂ Free CityÂ toÂ Grand Theft AutoÂ in that it’s an open-world space where players can interact with each other online through their characters, steal cars, go on shooting sprees, and generally wreak havoc. Comer got her hands on a PlayStation as “homework,” withÂ Marvel’s Spider-ManÂ being her favorite that she tried.

“I liked the freedom of swinging from buildings and wasting time,” she says. “But something likeÂ Grand Theft AutoÂ is super stressful for me… I take games way too seriously.”

Looking back, though it feels like a lifetime ago that Comer made this film before the COVID-19 pandemic delayed all of movie kind, she seesÂ Free GuyÂ as “a real warm hug of an introduction into the industry” after Levy and Reynolds created an environment that encouraged her to share ideas and even improv – which is not her “comfortable spot,” she admits. “I like a good ol’ script.”

Free Guy, one of the summer’s few theater-only blockbusters, premiering this Aug. 13, is only the beginning for Comer as she charts out her next moves. Soon she will be seen oppositeÂ Ben AffleckÂ andÂ Matt DamonÂ inÂ The Last Duel, where she actually gets to act opposite herÂ Star WarsÂ colleagueÂ Adam DriverÂ in the 14th-century France-set drama from directorÂ Ridley Scott. Then, she’ll play the wife ofÂ Joaquin Phoenix‘s Napoleon Bonaparte inÂ Kitbag, another Scott production.

“I think what I’m really enjoying about film is it’s a very different experience than television in that you have a fully fleshed out thing in front of you that you can really dive into the material and know where you are from beginning to end, which is a new experience,” Comer says. “Killing EveÂ is ever changing and ever growing. So, I think I’m really enjoying that aspect, to have the freedom to work with different people and it not take as long out of the year.”

“I’d also love to do theater,” she adds. “I’ve read an incredible theater script at the moment which I really, really want to do. I’m really hungry to throw myself into new territory.” She’s off to a good start.